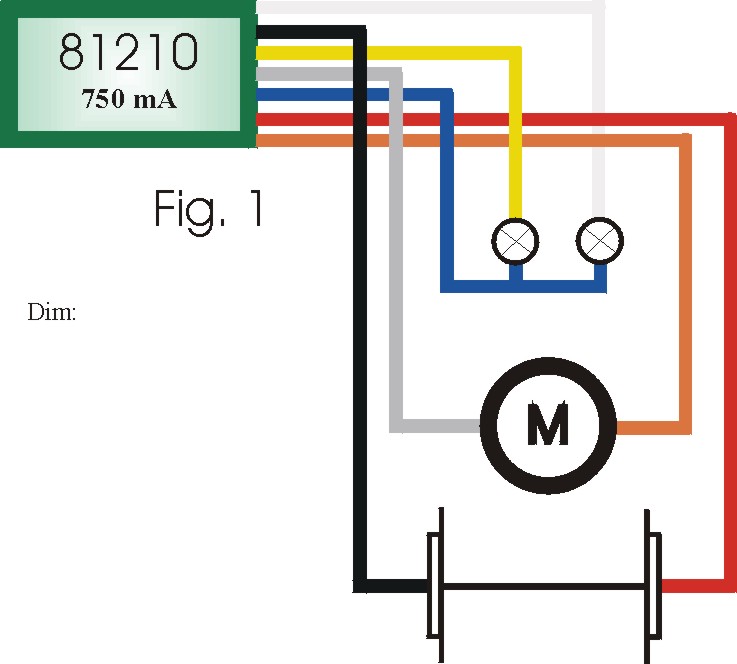 Its power output is max. 750mA. It has the following features:

Test the current consumption of the loco in normal DC operation. At full power and blocked wheels it must not exceed 75OmA. Be sure that there are no electrical connections between the motor inputs and the wheels or the chassis.

First connect the black wire to the contacts of the left wheels and the red wire to the contacts of the right ones. Then solder the orange wire to the motor input that has previously been connected to the right wheels and the grey wire to the motor input formerly connected to the left wheels. Put the loco onto the programming track-section and read out the loco address. lf the programming device (e.g. the Modeltreno Intellibox) detects the address (factory default is 003), the receiver is wired correctly. Now you can try a short run of the loco in order to be sure that it runs in the direction the loco control indicates. lf the running direction is wrong, please swap the orange and grey wire at the motor inputs.

(Fig. 1 shows the wiring in case of bulbs that have no electrical connection to the chassis).

(Fig. 2 shows the wiring in case of bulbs that are placed directly inside the chassis and therefore have an electrical connection to one of the rails).

On locos equipped with a white and a red headlight you can combine the white light on one side with the red one of the other side. The receivers can feed both lamps by the same output.

The loco receiver is equipped with an on board short-circuit detection preventing damages to the decoder itself. A test is continuously done and the receiver reacts very sensitive even to small and short overloads. If a short-circuit or an overload occurs, the loco is stopped at once. In this case please take the loco off the rails and search for the problem (Wiring ok? Motor inputs still connected to the chassis or wheels? Wire damaged?). If the error is not corrected the loco wili stop ever and ever again.

The CV 29 is a memory that keeps the state of some important features of the loco receiver. Calculate the sum of the values, resulting from the list below, that you want to program and write the sum into the CV 29 (default is 004).

operates another set of features of the Arnold loco receiver. As before calculate the sum of the values you want to program and write it into this CV CV49 load compensation 0 = on 1 = off   short-circuits-detection 0 = always 2 = at start   data storage 0 = on 4 = off   digital/analogic operation 0 = digital 8 = analogic   Motorola-format detection 0 = on 16 = off

In case of problems due by dirty track or dirty wheels, it's a good idea to switch off the Motorola - format detection.

if you select an unfortunate value, there can occur mechanical resonances (inconstant speed). The value 020 has proved, during our tests, to be a suitable programmation for this feature.

In DC operation this CV controls the width of the pulses of the current feeding the motor, therefore the top speed of the train.

How to program the loco receiver

You can change the address of the loco and any programmation of the registers by Modeltreno Intellibox. The programming devices of other manufacturers can program the loco receiver 81210 too, if they work along the NMRA rules.

lmportant : the loco receivers delivered in Germany must be programmed to run on a DC layout by indicating the DC - operation via the CV49 (see above). This makes the loco run only on DC - layouts. If you want to come back to digital operation, then you re-program the loco to digital service by changing the CV49 once again.

The Arnold loco receivers can run on a Märklin Digital (Motorola data format) layout. They understand the old and the new extended format.

You must not run an Arnold digital loco on conventional AC layouts.